Chronic Sinusitis is the Disease of Deep Breathing and How to Reverse It. 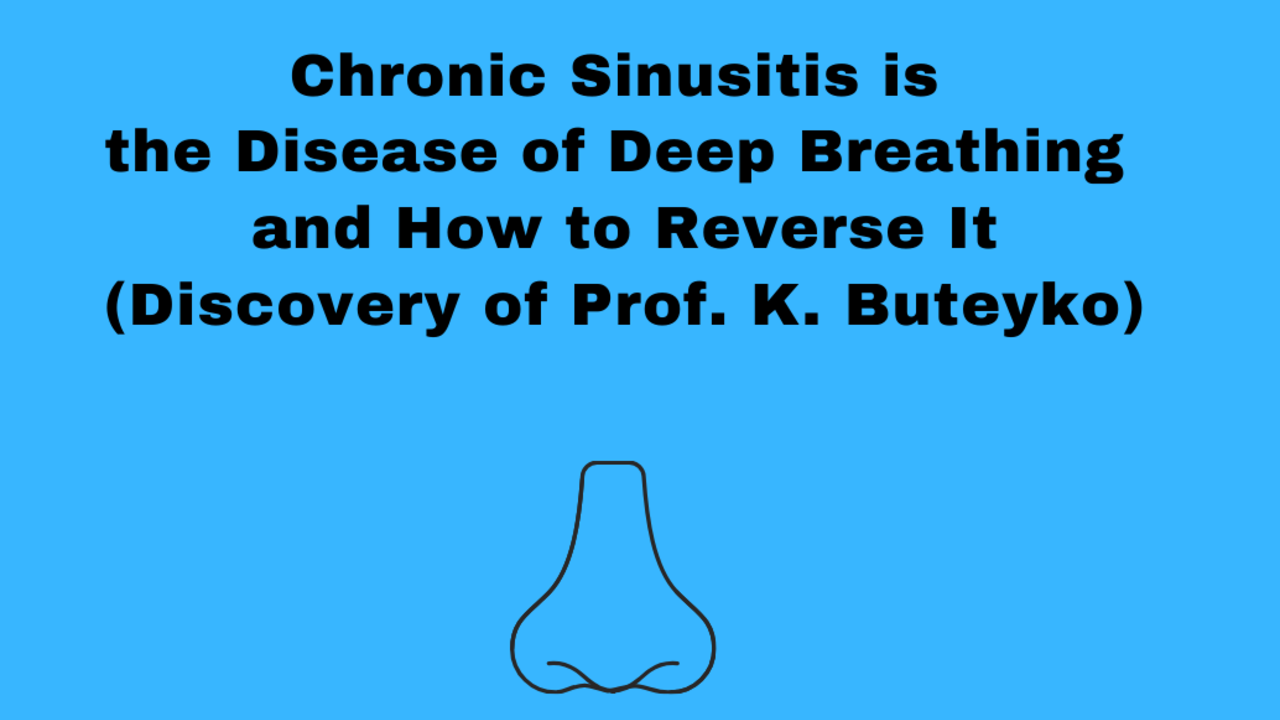 Yesterday, many people were watching with excitement when SpaceX sent NASA astronauts into space on the Falcon 9 rocket. At that time, I thought it was very odd that we are able to send men into space, but when it comes to chronic sinusitis, people who are suffering from this humiliating and exhausting disease don’t have a good explanation as to why this happened to them.

What few people realize is that a renowned Russian physiologist, Prof. Konstantin Buteyko (MD/PhD), made a colossal discovery in 1952 regarding the causes of Sinusitis and other major modern prevailing diseases (such as asthma, bronchial disorders, hay fever, nasal congestion, snoring, anxiety, panic attacks, insomnia, hypothyroidism, high blood pressure, and many others).

According to Prof. K. Buteyko, there is only one cause of all these diseases, and it is called hyperventilation or deep breathing. He concluded that the elimination of hyperventilation or breathing normalization would treat all of these diseases. His discovery was supported by the laws of biology, biochemistry, and physiology. Dr. K. Buteyko dedicated his entire life promoting his breathing reduction method and successfully treated people with health problems all over the world. For instance, Dr. Buteyko traveled to Great Britain and was able to help Prince Charles with his challenges.

Here are the details of Dr. K. Buteyko’s discovery.

When we are engaged in deep breathing (or hyperventilation) we lose excessive amounts of CO2; the level of CO2 falls in the lungs, blood, and cells.

It has been known that as CO2 level decreases, oxygen increases its binding with the hemoglobin in the blood. As a result, the transportation of oxygen from the blood to the brains cells, heart, kidneys, and other organs becomes more difficult. This law has been known as Bohr effect, developed by Christian Bohr about 50 years before Dr. K. Buteyko made his discovery about hyperventilation. So, the more and deeper we breathe, the less oxygen is transported to the cells of the brain, heart, kidneys, and other organs.

There are other underlying principles of Dr. K. Buteyko’s discovery, but the basis of it is that deep breathing has a negative impact on the oxygenation of the body, causing the constriction of airways, blood vessels, bile ducts, and other organs.

Dr. K. Buteyko developed a breathing reduction method that helps bring the CO2 level to normal. This method is known as the Buteyko Breathing Method.

To reverse Chronic Sinusitis, one has to restore normal levels of CO2. It can be achieved through the Buteyko Breathing Method. When normal levels of CO2 are restored and the body is balanced, there is no reason for the body to constrict nasal passages, and a person can breathe again.

Click here to join the Membership program to learn how to reverse Chronic Sinusitis and Asthma!